Leisure United Jeffrey Humble played host to the Merseyside Police Chief Constable and the region’s Police Commissioner’s ‘She Inspires’ football tournament on Sunday July 3rd, alongside a top squad of partners. The ‘She Inspires’ initiative was a 2-month project, where 120 young women aged 15-18 participated and earned FA accredited qualifications in coaching and refereeing. Hesketh Colts Blues won the female football tournament final, but everyone involved won the opportunity to take part, gain confidence, grow self-esteem, and realise their potential on and off the pitch. Read all about it on the Merseyside Police news website here 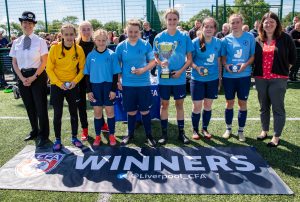 ‘She Inspires’ is a fantastic example of community partners collaborating and investing in female football in an inclusive and inspirational way. BBC North West News covered the event, which was well timed as interest in female football increases ahead of the Women’s Euros. The talent, enthusiasm and focus of all involved was great to be part of and LU can’t wait to see participation in the female game continue to grow in its hubs, going forward.

We use cookies on our website to give you the most relevant experience by remembering your preferences and repeat visits. By clicking “Accept All”, you consent to the use of ALL the cookies. However, you may visit "Cookie Settings" to provide a controlled consent.
Cookie SettingsAccept AllReject All
Manage consent

This website uses cookies to improve your experience while you navigate through the website. Out of these, the cookies that are categorized as necessary are stored on your browser as they are essential for the working of basic functionalities of the website. We also use third-party cookies that help us analyze and understand how you use this website. These cookies will be stored in your browser only with your consent. You also have the option to opt-out of these cookies. But opting out of some of these cookies may affect your browsing experience.
Necessary Always Enabled
Necessary cookies are absolutely essential for the website to function properly. These cookies ensure basic functionalities and security features of the website, anonymously.
Functional
Functional cookies help to perform certain functionalities like sharing the content of the website on social media platforms, collect feedbacks, and other third-party features.
Performance
Performance cookies are used to understand and analyze the key performance indexes of the website which helps in delivering a better user experience for the visitors.
Analytics
Analytical cookies are used to understand how visitors interact with the website. These cookies help provide information on metrics the number of visitors, bounce rate, traffic source, etc.
Advertisement
Advertisement cookies are used to provide visitors with relevant ads and marketing campaigns. These cookies track visitors across websites and collect information to provide customized ads.
Others
Other uncategorized cookies are those that are being analyzed and have not been classified into a category as yet.
SAVE & ACCEPT
Powered by